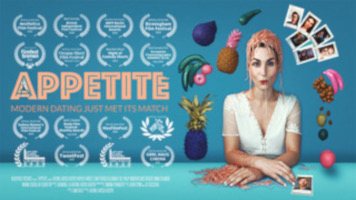 Award-winning indy short ‘Appetite’ is released this week. Dissecting the dilemmas of modern dating, this charming film was directed by Xuemeng Li and Katrin Kasper and written by Sam Oates, and features a number of scenes shots in Hornsey library in Haringey, during June 2019.

At the heart of this witty comedy is predatory dater Steph. When a large bill arrives, she’s nowhere to be seen, for Steph is a serial dine-and-dasher. Wearing elaborate guises, she believes she can slip away from the table and not suffer the consequences. But everyone has to pay in the end.

Xuemeng and Katrin were both first time filmmakers so it was all the more exciting to see ‘Appetite’ being officially selected by festivals. The movie was featured in 30 festivals celebrating independent films – in the UK, USA, Germany, Australia, Russia. Appetite collected awards for Best Comedy at Bristol Indie Film Festival and Best Comedy Performance at Kino London’s The People’s Film Festival.

Appetite is being released this Sunday 16th May via the video platform PAUS (like Netflix but for short films – and entirely free). Whet your appetite and watch the trailer – and spot Hornsey library’s starring role.