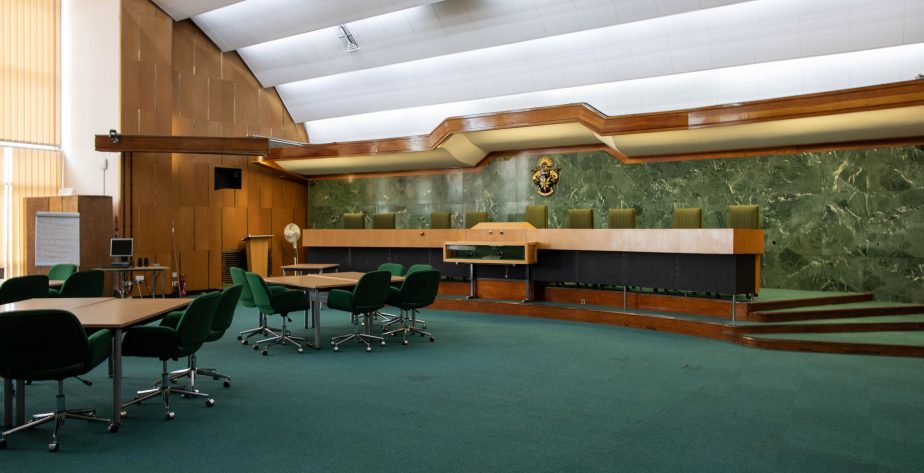 We’re thrilled to say that one of Haringey’s most versatile film locations will be available again in 2020.

Haringey Civic Centre consists of a registry office, large reception area, and a great number of committee rooms and offices – many of which are empty. It boasts an impressive court room with a balcony, green marble walls and tiered seating. If you’re not familiar with the site, check out the entry in our location gallery. It is grand and sleek, classic and modern. Some productions have been known to use a single room. Others have taken over much of the building for set dressing and transformations.

Most recently, you might have spotted Haringey Civic Centre on screen The Crown, season 3. Episode 4 explored the Royal family’s battle with their public reputation and introduced us to Princess Alice of Battenberg. It was a brilliant episode and Haringey Civic Centre provided a pivotal location, doubling as the Guardian offices. This is where fictional journalist John Armstrong writes his take down of the Windsors’ legendary BBC documentary.

The shoot took place in July 2018 and consisted of a 13-hour shoot day with 2 days of prep and one of strike. The attention to detail from the Art Department was truly spectacular (as seen below) and staff at Haringey Civic Centre were very accommodating in making the space work. They authorised everything from the removal of furniture to the covering up of whiteboards.

Haringey Civic was also able to provide the production with Green Room space in the form of the Council Chamber. Throughout the shoot, supporting artists in an array of retro costumes could be found hanging out and drinking tea in the grand space. Quite the novelty for Council staff!

The production made a generous donation to the Mayor’s Charity for the shoot and all involved were incredibly pleased with how it went.

We’re looking forward to seeing similar filming successes at this truly unique location in 2020. If you have a project coming up, email info@haringeyfilmoffice.co.uk to find out more about the Civic Centre and its availability.