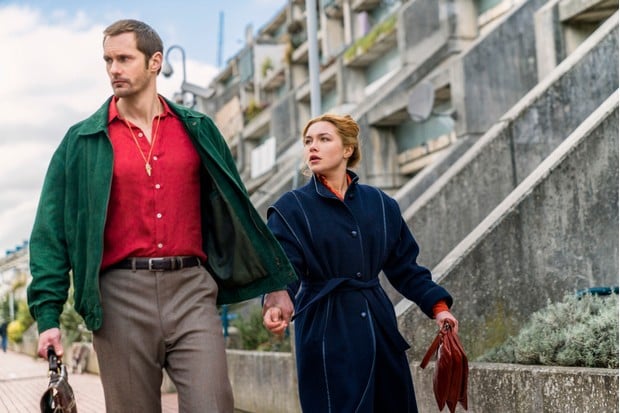 Residents around Camden, Haringey and Islington have already had the pleasure, as the series filmed around their neighbourhoods in February and March this year.

Set in 1979, Charlie (Florence Pugh), is an actress performing in pub theatres and struggling to land a breakthrough part. An anonymous benefactor sends her theatre troupe on a rehearsal jaunt to Greece. During the working holiday, she meets Skarsgard and is lured into an international espionage operation.

FilmFixer manages the film office service for Camden, Haringey and Islington. FilmFixer CEO Karen Everett reveals where some of the filming took place: “A private location in Islington’s Oakley Road was used as Charlie’s flat, a punk-like squat where she entertains her theatre friends, and where, without her knowledge, spies are rifling through her belongings.

“Bevin Court in Islington on Holford Street was used as the home of Becker (Alexander Skarsgard). Among the production’s requirements was a prop telephone box, from which a character called Daniel, watches Becker and Charlie as they arrive. The couple head up to a sixth floor flat, with a view west toward the BT Tower.

“One hundred cast and crew filmed inside a home on Amwell Street in Islington, used as the safe house of characters Helga and Rossino.

“Over in Camden on the beautifully brutalist Alexandra & Ainsworth Estate, a particular exterior on Rowley Way was described as a key match, an authentic looking location for the Munich Olympic Village. The lead actors visit a plaque there, commemorating the 1972 massacre of Israel’s Olympic team and police officers.

“A very generous donation was made to residents through the tenants and residents association. In a letter, the production said, ‘We would like to thank all residents and local businesses. The film and TV industry relies heavily on the goodwill of people in the areas we film. We are very grateful for this continued support.’

“Also in Camden, a great deal of action was filmed at University College London, a private location on Bedford Way in Camden, over three days.

“Driving to Becker’s place took Alexander Skarsgard and Florence Pugh from Finsbury Park in Haringey through local streets. The park itself doubled as the outskirts of London, as Florence Pugh playing Charlie rides around on a bus, empty except for one other passenger, and she’s not sure he is a good guy or working for the other side. Nervously, she plays with the thread of the bracelet at the cuff of her jacket.

“The Mildmay Club in Hackney’s Stoke Newington was used as a pub theatre location, around which FilmFixer arranged parking on behalf of Islington Council for the production.

“For filming in the City of London’s Golden Lane Estates garages, FilmFixer arranged parking nearby as well.”